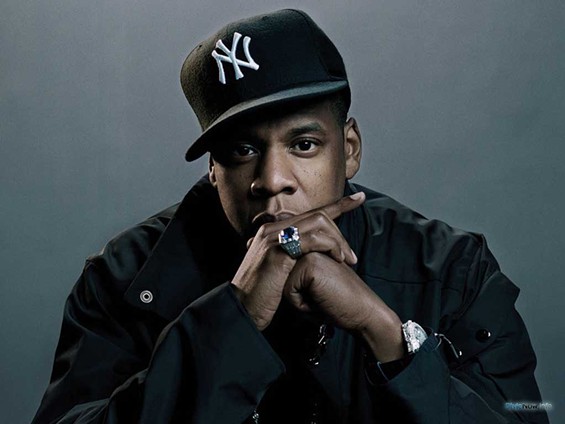 Picking hip-hop’s greatest songs is an incredibly difficult (and incredibly fun) undertaking, considering the various styles that have splintered the genre every way imaginable. Now 40 years old, hip-hop no more belongs to Bronx originators than it does to today’s kids; its popularity has stretched to all corners, and the various mutations reflect that. Our picks reflect the songs that innovated, enlightened, delighted, and lasted. These are hip-hop tracks that, with any justice, our grandchildren will have on playlists that are implanted into their brains, or whatever. -Ben Westhoff

The most memorable song off the best rap album of the ’00s, “Izzo (H.O.V.A.)” is a  last rap gasp of pre-bombing exuberance, a big-budget celebration that’s gulping down expensive champagne and doesn’t mind spilling some of it on the carpet. Producer Kanye West wasn’t the first to sample the Jackson 5’s “I Want You Back” (even that year) but, cliched or not, it’s hard to imagine a more perfect flip. In the end, it’s the contrast of the melody sung by a child and the tales of a drug-dealer’s come-up that give the song its grit and substance. But, again, this is not a hardship tale. Hov did that so we wouldn’t have to go through that, or for that we thank him. -Ben Westhoff

Shock G’s alter-ego Humpty Hump was introduced on “The Humpty Dance,” nasal voice, Groucho Marx disguise and all. Confident and funny, the track remains a staple everywhere from proms to strip clubs. Channeling P-Funk and Sly Stone, Humpty talks everything from sex (in a Burger King bathroom) to lumpy oatmeal, all while teaching you his silly new dance. It’s fair to say that Humpty Hump has outlasted the Rappin’ Duke, Doo Doo Brown, and WC’s Rappin’ Granny as the ultimate hip-hop comic foil. -Jake Paine

“Stan” is the third single on Eminem’s diamond certified The Marshall Mathers LP, and its format is an exchange of letters between the artist and a fanboy. The Dido sample works perfectly, the background sounds are cinematic — from the scribble of pencil on paper to the rainstorm and the muted screams — and the lyrics are particularly haunting. Eminem’s multi-layered fictional narrative deftly captures the voice of a kid on the verge of becoming a homicidal maniac. In doing so, Eminem examines himself and his art, in the process extending the boundaries of rap as an art form, and coining a term (“stan”) for a crazed fan. -Max Bell